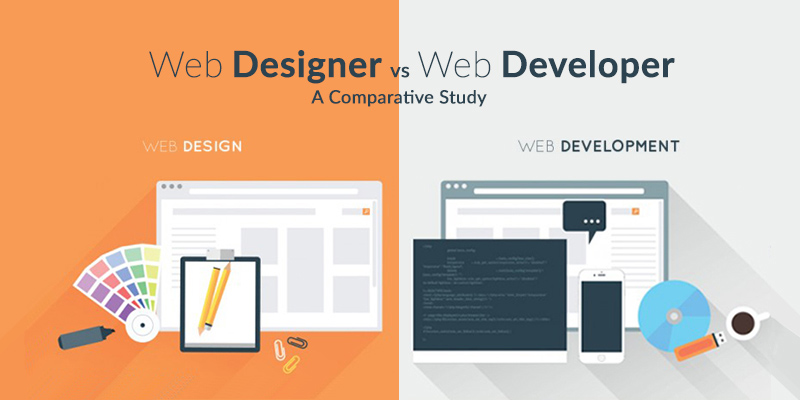 So what’s the difference between a web designer and a web developer?

More often than not we have heard these two terms used interchangeably. But are they really one and the same? Are they different?

In this article, we shall look closely at each of the roles and understand how they contribute towards the creation of a website in their own way.

Ready for the battle? It’s web designer vs web developer!

The web designer is primarily responsible for creating the look and feel of the website.

They are the creative ones who think “Is this color scheme consistent with the brand image?” “Does this page layout enhance user experience?” and the likes.

Their mental faculties of choice are intuition and imagination.

Designers can come from various educational backgrounds but a majority of them have some education, formal or informal, in arts.

Their tools of choice are graphical design software such as Adobe Photoshop, Illustrator, and the likes.

They are more likely to work closely with content writers to ensure that there is a consistency between the design and the copy. And they often work independently of the developer.

Finally, the output of web designers are usually in the form of JPEGs, PNGs, etc. And these files then become the input for the developers.

The web developer, on the other hand, is completely different.

To give you an analogy, the web designer is similar to someone who is responsible for the way a building appears from the outside, its interior decorations, and the landscaping of the garden.

The web developer is the engineer and the architect of the building who builds it from the ground up after considering all the technical aspects.

The web developer is the practical one who thinks “Will the website load without any error?” “Will all the links and other functionalities work the way they are supposed to?”

Their mental faculties of choice are logic and analytical thinking. The kind of attributes generally associated with the left brain.

Most web developers are from science and math background with a degree in computer science.

They use web development tools such as Sublime Text, jQuery, and Angular.js.

They write codes that give life to the content created by writers and web designers.

It’s clear that web designers and web developers are as different from each other as chalk and cheese. However, they both share the same objective – creating a clean website that looks great and functions flawlessly.

As the collaboration between the design and development team increases, the line that divides these two functions is getting blur everyday and the web designer vs web developer debate gets more interesting.

We find that more and more designers are beginning to understand the development and coding options of website building. Similarly, more and more developers are now able to appreciate design requirements of the client to better deliver their output.

If the current trend is anything to go by, we can clearly see the designation of web designer developer becoming a reality soon.

One of the most popular website development tool, the Adobe DreamWeaver CC, brings both design and development under one single interface. This is indeed is a sign of changing times.

Collaborating With Each Other

Considering all the differences between web designer and web developer, the question arises, “Can these two really collaborate with each other?”

One of the most important factors that determines how effectively these two can collaborate with each other is communication. That’s the key.

So let’s explore ways to bridge this communication gap to enhance this web designer vs web developer discussion.

Towards Becoming the Web Designer Developer

In section about the common objectives of designer and developer, we saw that the roles are increasingly becoming interchangeable. What was once considered as traditionally a designer’s role has now become a developer’s role and vice versa.

This is because more and more designers and developers are acquiring each other’s skill sets.

I know of a friend who started as a designer in the printing media. This was back in the day when the web development industry was in its infancy.

As his skill as designer was in greater in the electronic media, he moved over to designing websites. And that’s where he realized that as designer he could add more value if he learnt some coding skills.

And that was the beginning of it all.

The point is, you learn a good deal of coding skills if you are basically a designer and vice versa and possibly put an end to this web designer vs web developer saga.

These days, youngsters are who are just starting their careers are picking up both the skills simultaneously and that’s resulting in stunning websites that were difficult to create few years ago.

Just remember that ‘right-side left-side brain’ abilities is not supported by science anymore and you can be creative and logical at the same time.

So now that you have a clear understanding of what separates a web designer from a web developer, and what are the common factors that binds them, you are in a much better position to understand the contribution of each of these roles towards creating a great website.

Are you a designer or a developer? Which side of the web designer vs web developer divide are you? Have you ever made the effort to understand and learn what the other team does? I am curious to learn more about your experience. Do use the ‘comments’ section below and let’s have a good chat.